In October 2019, the Global Maritime Forum published its annual monitor in which it noted that the global maritime industry—which transports 90 percent of global trade—is ill-prepared for the challenges it faces in the short to medium term. The top threats highlighted in the report include cyberattacks, geopolitical risks, and environmental regulations.

The Global Maritime Forum’s 2019 report identified cyberattacks and data theft as some of the biggest threats to the industry. Sikich notes that as fully autonomous vessels roll out, anticipated to be in commercial operation by 2025, the industry’s already lagging cyber coverage will make it even more vulnerable, and supply chains could be exposed to long and expensive disruptions.

The rise of Global Navigation Satellite System spoofing, in which false position coordinates from ground-based transmitters that mimic those sent from satellites are sent to ships or vehicles, poses a growing threat to the maritime shipping industry.

RANE expert Daniil Davydoff from AT-RISK International says that companies should examine the ways in which their operations rely on GNSS technology and develop alternative methods or policies to prevent disruption in the event that GNSS reliability is compromised.

While maritime piracy has decreased worldwide, Sikich notes that hotspots for armed robbery and abductions persist, including Africa’s Gulf of Guinea, which accounted for 82 percent of crew kidnappings globally in the first nine months of 2019. 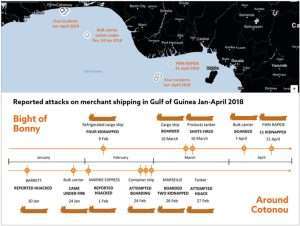 Geopolitical risks continue to be a concern for the shipping industry, with companies and governments’ heightening of security measures around the Strait of Hormuz a prime example. Several operators suspended oil shipments through the Strait in the wake of the recent escalation in US-Iran tensions, and Sikich notes that others have diverted cargo shipments to Oman or have had their ships switch off their tracking systems to avoid detection.

Sikich notes that container-carrying capacity has increased by almost 1500 percent since 1968, creating a number of new financial and reputational risks for players in the industry. 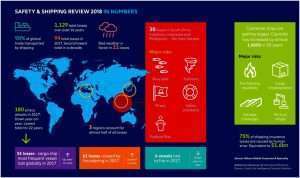 In what some analysts are calling the biggest shake-up for the oil and shipping industry in decades, stricter environmental emissions regulations, including IMO 2020, which requires ships to use fuel with sulfur content of 0.5 percent or less, down from 3.5 percent, or to install devices that strip out the pollutant, will create large short-term costs for industry players.

Some analysts are concerned that low sulfur fuels have not been adequately tested on ship engines, which could risk damaging engines at sea and lead to costly repair delays along the supply chain.